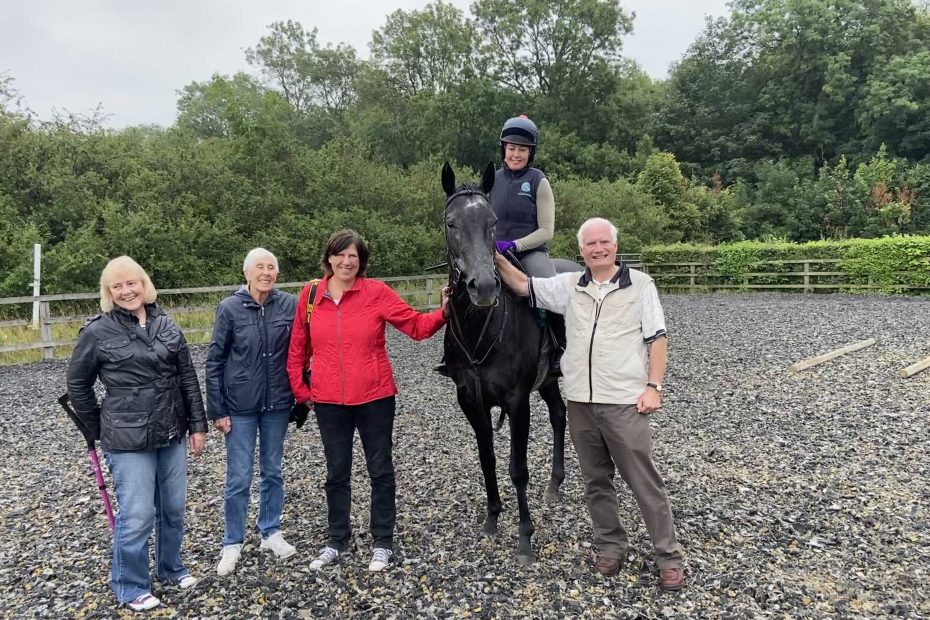 It certainly has been a very different August to last year. We’ve had fewer horses in the yard but it has been good to be much busier now the normal racing routines have been resumed, compared to last summer when we were still in the depths of uncertainty due to the pandemic. As numbers of residents dropped and lots of the holidayers went back into training, we’ve been kept busy with the youngsters and with the pre-trainers coming back into work.

The month started with a trip to Doncaster Sales, the Kalanisi 3 year old filly that we had backed and prepped didn’t sell but the sales were split this year and day 2 was a lot quieter than usual, maybe a sign of things having not quite recovered as yet. Her owners have a plan B for her though and she has gone into training and we look forward to seeing how she gets on.

Another Kalanisi filly we have had with us is Missfit, a lovely 4 year old for pre-training sent to us by Heart Racing and Broadwell Stud. We were pleased to welcome her owners for a visit along with some of her syndicate members (pictured above) to meet her and see her in the school before she goes into training with Nick Gifford. She has been lovely to do and is a three part sister to Champion hurdle winner Katchit so she should be an exciting prospect for all connections. We’ve had quite a few owners visits in the last few weeks and it’s been lovely to be able to have visitors back in the yard and for them to see their horses in action.

All of the youngsters have been doing well, some have been back for further education, some for breaking and some pre-training, all at different stages. We said goodbye to Pink, the Mastercraftsman 2 year old owned by the A Wish Away partnership headed by Stefan Hibbett, who went into training with Anthony Honeyball. We’ve also had a lovely 4 year old called Magic who is by Mr Medici and out of Lady Myfanwy, owned and bred by Paul and Myfanwy Miles who sent him to be backed and to sell. I have a soft spot for him being out of one of my favourite mares from my p2p racing career, she carried me to some fabulous wins including a Hunter Chase at Stratford and the race that won me the AGA Lady Riders Championship.

There have been the usual comings and goings with the pre-trainers and the non TBs. As I’m always saying we’re grateful to have the variation in the yard and there is never a dull moment. Over the last couple of weeks we have said farewell to Golden Taipan who has gone back to Fergal O’Brien and Noble Savage to Nigel Twiston-Davies. There will be more to go over the coming weeks including Benny’s Bridge, Milanese Rose, Maninsane and Emmarelli. We also saw Mr Bramley aka Tonto go up to Jedd O’Keeffe’s, owned by Howard Posner and by Schiaparelli, he is part of the Apple Family bred by our friends Fran and Christopher Marriott. Another favourite member of the family, Glimpse of Gala, has also been here for a short working holiday.

We have re-homed two more RoR’s this month and had another day out with Gino Trail to Badminton for the Beaufort Supporters Club Show. A fun day out but no rosette for Gino this time, he did brilliantly up to a point but was not in the mood for standing still at the end of the day, so no qualification for Aintree! We love Gino and all his quirks and Simon has worked hard to get him where he is from the superstar racehorse that he was. Time will tell, he will now enjoy a relaxing holiday and we shall see where he takes us next.

I’m excited for the new pointing season as ever and it’s always good to see them come in for their new shoes and to start work. Two famous names in the string this year, Argot and Melekhov. Argot is another favourite from my riding career, I taught him to jump when he was at Charlie Longsdon’s back in the day and he gave me my 100th winner, so I am thrilled to bits to be able to take him pointing thanks to David Prince. Melekhov aka Don is also a Fern Farm favourite. Trained by Philip Hobbs he had some lovely form under rules as a younger horse and we’re hoping that to run him pointing will get him back on track. I’m very grateful to his supportive syndicate at Owners For Owners and to Jon Hughes for giving us this opportunity. We will also be running Earcomesbob aka big Max owned by Bob Stowe, an unnamed 4 year old by Gregorain sent to us by Ben Brain and two 3 year olds who will go as 4 year olds in the spring – Claude who is by Clovis du Berlais, owned by Jane and Neil Maltby and Sonny who is by Dunaden, owned by Diane and Martin White. It will be rewarding to see these two out on the track as we have educated them since they were babies, particularly Sonny who came to us as a weanling back in 2018.

Autumn feels like it is already upon us, which is ok because that means racing days and more newcomers to the yard to look forward to!