favourites: from babies to winners 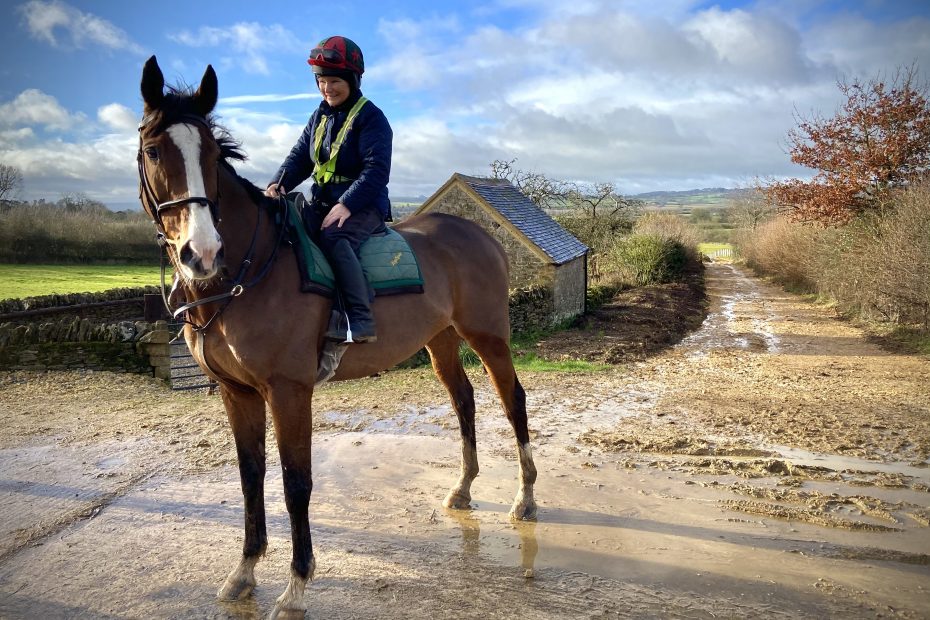 Here we are in March already and spring is nearly here. Despite the wintery weather, the suspension of point to point racing and continuing COVID restrictions, 2021 has got off to a very positive start at Fern Farm. We’ve been extremely busy with a full house of holidayers, liveries, breakers, broodmares, retirees and horses in work. The temporary stables have had to make a reappearance and it has been a juggling act with all the usual comings and goings.

We are very grateful to be so busy with certainly no complaints from the business side of things and it has meant there has been more than enough work available for my team. It’s always a relief when the days start to get longer and the occasional sunny days give us a spring in our step. The grass is growing and more daily turnouts means happy horses.

Starting with the babies we’ve had a few different aged breakers all at various stages which always keeps things interesting. We’ve been filming a series to show the progress of Bliss, a lovely Coach House flat-bred 2 year old sent to us by Rose Jones. She has become quite the internet sensation! Thank you to everyone who has followed her learning journey, it’s very rewarding to hear how much people have enjoyed the videos and hopefully they have also been informative and fun. If you missed out they’re all on the home page here. Another very rewarding breaker to do has been Caddy, a Native Ruler 3 year old sent to us by Batsford Stud. She’s learnt in a different way to Bliss, as they all do, but they are now pretty much both up to riding solo and gaining in confidence. I expect them to both be ready to go in another couple of weeks.

We’ve had the more advanced babies on the gallops and been stepping up their schooling. One that has particularly stolen my heart is Carpe Diem, owned by Terry and Sarah Amos. He recently went back to David Bridgwater after being with us since new year. He has made me smile and also curse with his cheek, but I was really proud of the progress and improvement he made. Hopefully he will settle well into big school before he has a well-deserved holiday. The 3 year old Heerat filly known as Hattie, sent to us by Sarah Hollinshead, will also be leaving us soon, she’s progressed really nicely and is another of my favourite babies. Others to note are Bellway and Fincham, both progressing well and real characters around the yard.

The pointers are all going well and since the latest government announcement we are expecting to get going next month. Midnight Chill, Earcomesbob, Jennifer Juniper and Mogul Ruler will all be aiming for the first couple of meetings or sometime over Easter. We took Earcomesbob to run in a Hunter Chase at Leicester in February where he ran a creditable race. He had only run twice before, he jumped well to come 7th and he will have learnt a lot. The next move with Cody Jones is still undecided at this stage. I think an awful lot of him and he was very pleasing on a recent Lambourn away day with a string from Charlie Longdon’s, he may well go into training and aim for a bumper.

We have a number of horses in work at the moment and a few on rehab and rest. The aforementioned ‘babies’ Bellway and Fincham continue to please and have been doing some work on the gallops. Benny’s Bridge has stepped up his work and is heading in the right direction. Between the Waters and Redbridge Gold will go back to Jamie Snowden’s this week. Since the new year we’ve seen most of the winter holidayers go back into training including Chapmanshype, Some Day Soon, Floral Bouquet, Beholden and Fact Of The Matter, all to Jamie’s. Last month we said goodbye to two gorgeous mares who had been here for their winter holidays and some pre-training. Ballymillan owned by Heart Racing went back to Neil Mullholland and Hoot At Midnight owned by Neil and Jane Maltby went to Charlie Longsdon. We sent the two flat horses, Australis and Musicality from Biddestone Racing that we had for working winter holidays, back into training with Roger Varian. Glimpse of Gala also returned to Charlie Longsdon last week who had spent eight weeks with us, firstly on holiday and then four weeks in work. She is a gorgeous filly and we are very much looking forward to following her career which is off to a great start off her four runs last year, coming 2nd in a bumper at Bangor in September and finishing 3rd at Huntingdon in the listed mare’s bumper in December. She means a lot to us being owned/bred by our friends Christopher and Fran Marriott and being a member of the fabulous ‘Apple Family’. We’ve loved having all the holidayers around despite the need for extra stabling!…and wish all connections the best of luck going forward.

On the subject of those very apples – Glimpse of Gala’s sister, my broodmare Rosemary Russet, has gone to Batsford Stud to foal, being due in a couple of weeks from now. She joins Scented Lily who we took a few weeks ago and is due any time now, so hopefully some happy baby news soon. We have a few other yearlings in residence including the Fern Farm monkeys Bertie and Peter, who also have quite the social media following! They’ve been out in the field the past couple of weeks having a generally lovely time.

A highlight of the year so far was having the legendary Gino Trail (pictured above with Anthea on board) come to us from Fergal O’Brien when he retired from racing in January. His devoted and supportive owner Jan Smith only wants the best for him and we are aiming to keep him as our RoR ‘mascot’ and hopefully get him out to do some fun things and competitions later this year. If you know Gino’s racing style you will know he doesn’t like to hang around, but he has settled into retirement beautifully with us, pulling off some stunning flatwork in the school and helping with leading the babies and exploring the local hacks. I hope to get out on him very soon to enjoy some cross country jumping fun. He is lovely to ride and a real gent, he still likes to show off and we are all rather in love with him already. We are very lucky to have superstars such as him and Loose Chips here to live with us. The retired racehorses continue to give me so much satisfaction, whether it’s receiving the lovely updates that I get from the new owners or the process of assessing them, retraining and finding them homes. We’ve already found new homes for quite a few retirees this year, including Glengar, Fort Gabriel, The Lion Queen and Lyrical Ballad to name a few.

Results from the track so far this year have been amazing and have made me and the team so proud. Things kicked off well with one of my personal favourites the gorgeous Sandymount Rose, owned by Jonathan Whymark and trained by Neil Mullholland, winning her first two starts of the year at Exeter and Ludlow. So pleased for Millie Wonnacott who is having a fabulous run of form, she rode her so well at Exeter to recover after a mistake at the last and has gone on to win 8 from 26 rides this year. Rose’s sister Milanese Rose made a great start coming 4th in her bumper at Kempton for Fergal O’Brien, hopefully she can continue to improve. Another highlight running for Fergal was our holidayer and pretrainer Golden Taipan, known to us as Gus and owned by the Double Barrels of Courage partnership, storming home to win the ‘Jumpers Bumper’ at Kempton by half a length. So exciting, we adore him and after 63 days off this was the winning team of O’Brien/Brennan at their very best!

Foxtrot Racing’s Anythingforlove continued her consistent form, resulting in a meeting between her and Sandymount Rose in the grade 2 listed Jane Seymour Mares Hurdle at Sandown on 18th February. Rose was the more favoured in betting but Anythingforlove ran a blinder to beat her on the run in and we had the ultimate ‘CHE black type holidayer and pretrainer 1st and 2nd’. It was obviously one of two best possible results for us and I was so pleased for Page Fuller, the owners and Teams Mullholland and Snowden. Foxtrot Racing’s Hogan’s Height, who spent his summer holiday with us last year, continued his journey to Aintree having ‘a good blow out’ over hurdles at Wincanton for Jamie Snowden. The plan is he’ll go on to the Glenfarclas Cross Country Chase at Cheltenham and we can’t wait to see how he does. Also for Team Snowden, it was brilliant to see another Fern Farm holidayer Diddly Do win a bumper at Wincanton.

To end on a high, I was beyond thrilled to see Luttrell Lad win in such style at Taunton yesterday under Richard Johnson. It’s no secret Gino is one of my favourite Fern Farm graduates, having been broken in here as a 2 year old and spent his holidays and pretraining with us ever since. Owned by the Ownersforowners syndicate run by one of our most loyal supporters Jon Hughes, he has rewarded us again with another 1st after winning his last race at Market Rasen back in November. I couldn’t be more delighted for Jon and his wife Jack who adore Gino as much as we do.

It’s pretty obvious at the end of the day they are all our favourites win or lose! There’s been a few knocks to our industry over the last couple of weeks and I fear we may not have heard the last of it all. These horses are our reason to be, they are why we get up in the morning and they are what keep me, my team and my business going. It so rewarding to see them do well out there on the track when we’ve put so much into their care and hopefully played our part in their success. Here’s to the horses who deserve our love and respect, always.